Start a Wiki
Hey, hold up! This page may contain a lot of spoilers.
It's recommended you play the game first before you read the article.

(Note: This isn't necessarily an ending to the game, but more the events that lead to the end of her life. It is an unavoidable event.)

Sayori's ending happens halfway through the game. It marks the end of Act 1. Regardless of the protagonist's choices prior, he will always rush into Sayori's bedroom, where she can be seen hanging by a rope in her room.

When the protagonist sees her, the game will begin to glitch out and the music will heavily be distorted, playing the music "Sayo-Nara", a distorted version of the music "Doki Doki Literature Club!". The protagonist claims that she is gone forever and suggests that choosing the other option when hearing Sayori's confession would have prevented this. When the game forcefully brings the players back to the menu, the result is a jumbled mess of each of the other character's sprites where Sayori used to be. The "New Game" option will also be replaced with a line of glitched text, but its functionality remains the same. Monika states in Act 3 during her conversation with the player that Sayori's hands are bloody because she stepped from a chair instead of a high place, so she slowly asphyxiated, instead of snapping her neck by jumping from a high place which would've been quick and painless. Monika then says it may have been her survival instincts that kicked in that caused her to scratch at the noose and tear her jacket, or simply because of changing her mind.

Sayori does not wear the outfit that she wore on Day 4, but instead she wears a white jacket and red shorts. One side of the jacket has been torn and has fallen down over Sayori's shoulder. Her red shorts appear to be made of leather or some other shiny material - the outer two stripes are reflections of the light. The shorts appear to be very tight on Sayori, fitting snug against her thighs and the drawstring is not tied. There are black shadows under Sayori's eyes, and her skin has a pale tone. The blood on her hands has dried a little and turned a rusty brown. This suggests that Sayori hung herself very early on Day 5, which has been confirmed by Dan Salvato in his Twitter.[1]

(Note: This isn't necessarily an ending to the game. However, this is an optional event, and the game continues normally like it never happened, so Natsuki doesn't stay in this state.)

Natsuki's "ending" will happen if the protagonist writes two poems for Natsuki in the first two days of Act 2. It takes place on Day 3, in the poem sharing time. When the protagonist shares his poem with Natsuki, she will complain that he has been spending too much time with Yuri. Natsuki's eyes and mouth will begin to glitch out and will be covered with black rotating pixels. She will then begin to cry blood.

She will keep rambling on and on that she wants the protagonist to play with her. Then she stops talking as the music cuts off, and for a short moment, the room will be filled with silence. She will then snap her neck to the right side of the screen at a 90° angle, and then quickly move towards the screen. A black screen will show with the word "END" flipped backwards before the game resumes and restarts as if nothing happened, with Natsuki still in the game.

(Note: This isn't necessarily an ending to the game, but more the events that lead to the end of her life. It is an unavoidable event.)

Yuri's ending happens after she shows her final poem to the protagonist during Act 2. Yuri confesses that she is in love with him. Regardless of whether players choose to accept her confession or not, she will stab herself with a kitchen knife twice in her stomach and once in her chest. The player is then forced to spend the weekend in the club room with her corpse, just staring at her as the lighting in the room changes and the blood colour darkens to indicate the passage of time, while the dialogue box displays over 1400 lines of random gibberish. It is later revealed by Monika that the whole weekend was running on a broken script.

(Note: This isn't necessarily an ending to the game, but more the events that lead to her deletion. She stays hidden in the game after this, but she doesn't manifest herself until the end. It is an unavoidable event.)

Monika's ending starts after the weekend is spent with Yuri's corpse, at which point Natsuki finds the protagonist with Yuri's body in the class, before promptly vomiting and running away. Upon entering, Monika will then delete all other characters from the game except for her. The screen will go black afterwards and soon show Monika sitting at a table in the now empty classroom, her hands tented under her chin and with a space-like background beyond the windows. Monika will then explain her motivations for her actions and confess to manipulating the game in order for the player to be left alone with her. A few of her lines indirectly instruct the player to delete her character by explaining how she deleted everyone else. After her monologue, Monika will say that she has to do something quick and that, in the meantime, they can stare into each other's eyes. Monika will then at certain intervals of time speak to the player about matters that usually concern the game (list of Monika's topics). The player is now free to delete Monika's character by accessing the game's files (or allow Monika to continue speaking for an eternity, though she will eventually run out of lines and repeat old ones). If the player decides to delete Monika from the game, Monika will then glitch out, before becoming disembodied and angrily expressing her disgust at the player. She will then claim that she made a mistake and express her regret at what she has done to her friends. Monika then reveals that she couldn't find it in her to delete her friends, due to her love for them and the Literature Club. Coming to a conclusion, she will add all characters back into the game except herself (though she remains a disembodied entity).

This ending will happen if the player didn't save-scum to spend time with all of the girls during Act 1. It's normally the first ending players go through while playing Doki Doki Literature Club! blindly.

In Act 4, after starting a new game, the game appears to be normal, up until Sayori addresses the player at the end of the day, thanking them for deleting Monika. At this, Monika comes to the realization that any character who falls into the president role will become self-aware and figure out that DDLC is actually just a game and that the characters have no free will. Because of this, Monika "deletes" everything as the credits roll. It's worth noting that any CG that the player never viewed is rendered in greyscale. As the credits begin and continue, Monika sings her self-written song "Your Reality" with her piano, which can be heard by the player as the only confirmed voice in the game. After then, Monika leaves a note on the player's screen. At this point, to play the game again, players will have to delete and reinstall it, or they can simply delete the "firstrun" file in the game folder and select "Yes" upon opening up the game again.

This ending can only be seen if players see all nine of the CGs of the three girls in Act 1 (three for Natsuki, three for Yuri, and three for Sayori) by creating poems for them, as well as Monika's Act 3 CG. One of the possible methods that can be done to get this ending is saving at the first poem, making all the poems specific to one girl, then before witnessing Sayori's suicide where the saves are then deleted, go back to the first poem save and repeat the process with a different girl. After Sayori, Yuri, and Natsuki's CGs have been seen, the game can be continued normally. Players also have to be careful not to delete Monika too early in Act 3, because if they do so without seeing the CG, the game will not count it as seen and they will just see the Normal Ending.

After Monika restarts the game without herself present, Sayori will gain the knowledge Monika had from her position as the president of the club, similarly to the normal ending, but will instead thank the player for trying to make all the girls happy. Sayori thanks the player for playing, and the credits will roll, but the images will not be deleted. The other game files will be deleted still, and the player must delete the firstrun file or reinstall the game to play again. Players will then get a thank you letter from the developer, which also contains a basic summary on his initial inspiration for the game itself and why he made it instead of the bittersweet letter from Monika.

Letter from the developer

To the special player who achieved this special ending.

For years, I have been enamored by the ability of visual novels - and games in general - to tell stories in ways not possible using traditional media. Doki Doki Literature Club is my love letter to that. Games are an interactive art. Some let you explore new worlds. Some challenge your mind in broad new ways. Some make you feel like a hero or a friend, even when life is hard on you. Some games are just plain fun - and that's okay, too.

Everyone likes different kinds of games. People who enjoy dating sims may have a heightened empathy for fictional characters, or they might be experiencing feelings that life has not been kind enough to offer them. If they are enjoying themselves, then that's all that matters. That goes for shooting games, casual games, sandbox games - anything. Preferences are preferences, and our differences are the reason we have a thriving video game industry. My own favorite games have always been ones that challenge the status quo. Even if not a masterpiece, any game that attempts something wildly different may earn a special place in my heart. Anything that further pushes the limitless bounds of interactive media.

I extend my true gratitude to all those who have taken the time to achieve full completion. I hope you enjoyed playing it as much as I enjoyed making it.

Thank you for being a part of my Literature Club!

If Monika's character file is deleted (as explained in Monika's Ending) before starting a new game in Act 1, Sayori appears to realize that she is trapped in a game. She will then force the game to close and delete the other character files, including herself. If players open the game after this occurs, instead of the usual opening and main menu, a black "END" screen appears followed by a screen of Sayori hanging herself. After 10 minutes pass, a message appears on screen: "Now everyone can be happy."

An even shorter version occurs if Sayori's character file is missing when launching the game with save data from the first act. Upon launch, the game simply skips immediately to the same series of screens, the "END", followed by Sayori hanging herself.

If the character decides to delete Monika in Monika's ending.

The first day of Yuri's death in 'Yuri's Ending.'

The second day with Yuri after her death.

The final day with Yuri after her death. 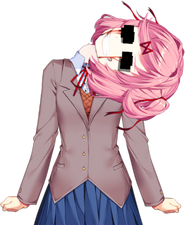 Natsuki's neck snap from her Ending

Retrieved from "https://doki-doki-literature-club.fandom.com/wiki/Possible_Endings?oldid=28919"
Community content is available under CC-BY-SA unless otherwise noted.