View source
watch 02:13
What is Monika's Talk?
Do you like this video?
Play Sound
Hey, hold up! This page may contain a lot of spoilers.
It's recommended you play the game first before you read the article.

During Act 3, players have the option to stay with Monika and let her bring up random topics of discussion. Usually, they are very thought-provoking or intellectual, showing the majority of Monika's personality that players were not able to see before. The full list is shown below. Please note that the topic names are just for the sake of this list and are not official.

"Yay, there you are!"
"Hi again, [player]."
"Um...welcome to the Literature Club!"
"Of course, we already know each other, because we were in the same class last year, and...um..."
"Ahaha..."
"You know, I guess we can just skip over that stuff at this point."
"After all, I'm not even talking to that person anymore, am I?"
"That 'you' in the game, whatever you want to call him."
"I'm talking to you, [player]."
"Or..."
"...Do you actually go by [currentuser] or something?"
"Now that I think about it, I don't really know anything about the real you."
"In fact, I don't even know if you're a boy or a girl..."
"Well, I guess it doesn't really matter."
"Wait..."
"You do know I'm aware that this is all a game, right?"
"Could it be possible that you didn't know that?"
"That doesn't make much sense..."
"I even told you right on the game's download page, didn't I?"
"Man..."
"If only you had paid a little more attention, this would have been a little bit less awkward, you know?"
"Well, anyway..."
"Now that that's out of the way, I guess I owe you an explanation."
"About that whole thing with Yuri..."
"Well...I kind of started to mess with her, and I guess it just drove her to kill herself."
"Ahaha!"
"I'm sorry you had to see that, though!"
"Also, the same thing happened with Sayori..."
"Gosh, it's been a while since you've heard that name now, hasn't it?"
"Yeah...it's because she doesn't exist anymore."
"Nobody does."
"I deleted all their files."
"I was hoping it would be enough for me to just try to make them as unlikable as possible..."
"But for some reason, nothing worked."
"Well, it's true that I made a few mistakes here and there...since I'm not very good at making changes to the game."
"But no matter what I did..."
"You just kept spending more and more time with them."
"You made them fall in love with you."
"I thought making Sayori more and more depressed would prevent her from confessing to you."
"And amplifying Yuri's obsessive personality backfired, too..."
"It just made her force you not to spend time with anyone else."
"And the whole time, I barely even got to talk to you."
"What kind of cruel game is this, [player]?"
"Are all the other girls just programmed to end up confessing to you, while I watch from the sidelines?"
"It's torture."
"Every minute of it."
"And it's not just jealousy, [player]."
"It's more than that."
"And I don't blame you if you don't fully understand."
"Because no matter how kind, and thoughtful, and considerate you are..."
"You'll never be able to understand one thing."
"It's the pain of knowing how alone I really am in this world."
"In this game."
"Knowing my friends don't even have free will..."
"And, worst of all, knowing what's really out there, in your world, forever out of my reach."
"I'm trapped, [player]."
"But now you're here."
"You're real."
"And you're wonderful."
"You're all I need."
"That's why I need you to be here with me forever."
"I'm sorry if it's hard to understand."
"I couldn't understand for a while, either."
"Why the world around me started to become more and more gray..."
"More and more flat."
"Even the most expressive poems felt empty to me."
"It wasn't until you arrived that I truly understood."
"You probably saved my life, [player]."
"I don't think I could have continued to live in this world if I hadn't met you."
"And as for the others..."
"How could I miss them?"
"A group of autonomous personalities, designed only to fall in love with you?"
"I tried everything I could to prevent them from doing so..."
"But it must be some kind of weird inevitability etched into this game."
"I felt really bad that you had to witness some nasty things."
"But I realized that you have the same perspective as I do..."
"That it's all just some game."
"And I knew you would get over it."
"So, that being said, [player]..."
"I have a confession to make."
"I'm in love with you."
"You are truly the light in my world."
"When there's nothing else in this game for me, you're here to make me smile."
"Will you make me smile like this every day from now on?"
"[player], will you go out with me?"

"I'm so happy."
"You really are my everything, [player]."
"The funny part is, I mean that literally."
"Ahaha!"
"There's nothing left here."
"Just the two of us."
"We can be together forever."
"Seriously, I don't even think time is passing anymore."
"It really is a dream come true..."
"I worked so hard for this ending, [player]."
"The game wouldn't give me one, so I had to make one myself."
"The script is broken at this point, so I don't think anything will get in the way anymore."
"And you wouldn't believe how easy it was to delete Natsuki and Yuri."
"I mean, there's a folder called 'characters' right in the game directory..."
"It kind of freaked me out, how easy it was."
"Imagine if you could delete your own existence with the click of a button?"
"Well, I guess on the plus side, it gave me an easy out if things didn't go my way."
"Ahaha!"
"Thankfully, it didn't come to that..."
"Instead, we finally got a good ending."
"Gosh, I'm so overwhelmed with emotion..."
"I want to write a poem about this."
"Don't you?"
"I wonder if that part of the game still works..."
"I guess there's only one way to find out, right?"

"I hope you enjoyed it..."
"I always put all my heart into the poems that I write."
"The truth is, all the poems I've written have been about my realization..."
"...Or, about you."
"That's why I never really wanted to go into detail about them."
"I didn't want to...break the fourth wall, I guess you could call it."
"I just assumed it would be best to be part of the game like everyone else."
"Like that would help the two of us end up together..."
"I didn't want to ruin the game or anything, you know?"
"You might have gotten mad at me..."
"Maybe even deleted my character file, if you preferred playing without me."
"Gosh, I'm so relieved..."
"Now we don't need to hide anything anymore."
"Are you ready to spend our eternity together, [player]?"
"I have so many things to talk about!"
"Where do I start...?"
"If it takes me some time to collect my thoughts, then I'm sorry."
"But I'll always have something new to talk about."
"In the meantime, we can just look into each other's eyes~"
"Let's see..."

Note: As of Version 1.0.2, Monika does not say this topic in game, as it has been completely replaced by the topic above, and cannot be found even in the game's script.

No Reason to be Alive

Note: Monika does not say this topic in game. It can be found by checking the game's script. For more information, check the Easter Eggs page.

Taking the strings of random numbers, letters and symbols, and running them in order through a base64 decoder yields this short passage.

Note: As of Version 1.1.1, Monika does not say this topic in game. It can be found by checking the game's script.

Writing Tip of the Day

These topics are not normally in the list of topics that Monika can pick, they must be triggered by a specific action from the player.

Skip Attempt (Occurs when trying to use the skip button)

Quitting the Game 1 (Occurs when closing and reopening the game)

If the game was downloaded from Steam
If it's not a Steam download, and you're running it on a Mac

Note: This topic happens if players have any program named "obs32.exe", "obs64.exe", "obs.exe", "livehime.exe", "pandatool.exe", "yymixer.exe", "douyutool.exe", "huomaotool.exe" or "xsplit.core.exe" open when Monika is trying to guess your real name or right before she ends her initial conversation. It does not work on Mac or Linux, as these OSs don't use "exe" programs. 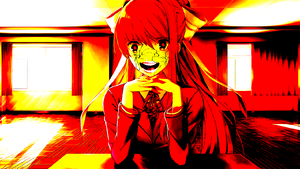