This version includes the original DDLC game with new side stories for the characters set outside the timeline of the base game, new music tracks, and a gallery for unlocking various pictures and concept art.

The game was announced on June 11, 2021, on Twitter by Dan Salvato along with the release of the DDLC Plus Website.

The game was released digitally on June 30, 2021, for Windows via Steam and Epic Games and for the Nintendo Switch, PlayStation 4, PlayStation 5, Xbox One, and Xbox Series. A Macintosh version will be released at a later undetermined date.[2] Other PC platforms are to be determined,[3] including if DDLC Plus will support Linux like DDLC does.

DDLC Plus also releases physical copies of the game that are expected to ship in Q3/Q4 of 2021 for the Nintendo Switch, PlayStation 4, and PlayStation 5.[4] The release date for North American retailers is August 31.[5] Due to mixed messages from retailers and Serenity Forge's own FAQ,[6] the dates for other countries are prone to change and are not final until further details.[7] European retailers will receive the game at a later undetermined date.[6] Asian retailers will receive the digital and physical edition on October 7.[8]

The physical copies are included in the DDLC Plus Premium Physical Edition's box, which itself includes various merchandise along with the physical copy for the platform of the buyers choosing. All physical copies will contain a disc or cartridge,[9] but only the Nintendo Switch release has the poem notebook inner coversheet.[10] A physical copy without the collectibles is not planned,[11] but the premium physical edition is not sold for a limited time either.[12]

On the Team Salvato blog announcement, Dan Salvato felt that that the characters of DDLC deserved more time with a wholesome story on their interpersonal relationships, and it is feeling that led to the creation of side stories. He hopes that the struggles the characters experience and resolve through their budding friendships will be relatable for the players experiencing these stories.

Nikki Kaelar is said to have collaborated with Dan in the past regarding music theory in video games, but it wasn't until DDLC Plus where they both worked closely to bring forth the new tracks. Dan notes that while there exist entirely new tracks, leitmotifs and familiar melodies will also be present in new compositions, which would fit into how music enhances scenes especially for strong character moments.

On the content warning blogpost, Joseph, a developer and community manager at Team Salvato, talked about the importance of game accessibility and its current rise in the video game industry. Taking direct inspiration from Ikenfell, Team Salvato has decided to include in-line content warnings where specific scenes will have specific warnings display beforehand if explicitly requested by the player in the settings. It is hoped that this implementation of content warnings will leave players relatively unspoiled but sufficiently reminded for their safety. This feature is expected to be updated over time from player feedback. 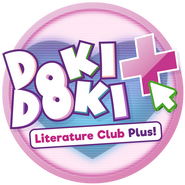 Promotional Image announcing the new DDLC Plus Side Stories 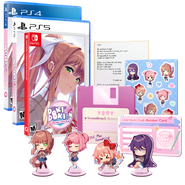